Smaller than many women’s toys, I should mention in this Rainbow Bliss Dildo review that it is still is a good size for penetration no matter what a woman’s usual preference is. The head comes to a wide, rounded point that applies pressure while being inserted and then can easily each a woman’s G-spot with the right angle or it can be used to simply keep a woman feeling full. The rainbow ridges aren’t just there for style, either, because they can actually be felt during penetration and add a nice texture to the toy. Every woman might review the bliss differently, but the rainbow ridges are an all around plus.

Like any glass dildo, the Rainbow Bliss has a nice advantage over other types of women’s toys because of the ability to be affected by temperature. Stick it in the freezer to cool it off, adding to the sensuous play, or warm it up under hot water. It will retain the temperature for a short period of time, but for long enough to have lots of fun with it. Even though it’s glass, don’t worry. The special glass is designed to withstand impact and if for any reason it does break it will break into large pieces rather than shattering, making this toy fun, cheap, and safe! 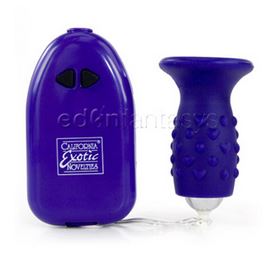